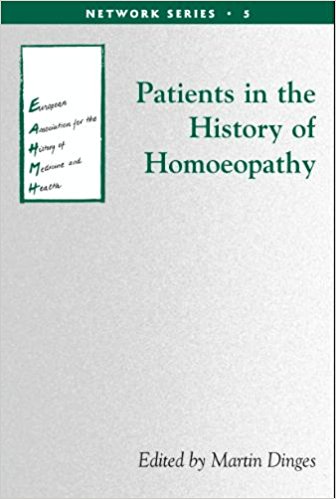 “Patients in the History of Homoeopathy” by Martin Dinges

I was reading a book on “ Patients in the History of Homoeopathy” by Martin Dinges and chanced upon some interesting but lesser known facets of Dr Hahnemann’s life and Homoeopathic Practice in particular I wish to share it with our readers.

• Hahnemann’s understanding of himself as a doctor was strongly influenced by the DIGNITY attached to the profession
• The dignity should be nourished by social esteem, general education and expertise.
• Hahnemann abhorred the practice of house visits of doctors( excepting the bedridden patients ) which was a prevalent thing in the times.
• He felt the need to change the social logic whereby the doctor must attend the usually important patient
• This is the start of the “modern” phenomenon of doctors finding it quite natural to keep patients waiting .
• Hahnemann’s achievement was that patients had to see him in a territory which gave spatialjustification to a heirarchial gradient favouring the doctor
• Another reformation was in the method of collecting fees . the normal practice in his day , was for patients to pay later. This applied both to individual treatments and to annual payments received by physicians who functioned as family doctor to a particular household in such cases the doctors received a fixed annual sum that might be supplemented in accordance with the treatment received .this custom put patients “debtors” in the powerful position of being able to postpone or reduce payment or even to withhold it together.
• Hahnemann insisted that Patients pay in advance possibly at the beginning of each consultation.
• Extensive refusal of home visits, and his method of charging point evoked a strong reaction even from his medical contemporaries and from aristocratic clients .
• Hahnemann expected that all his patients or at least the chronic ones undergoing extended treatment ,to have read his “Organon”.The way Hahnemann wished his book to be read called for an informed patient who would familiarize himself with the doctrines of Homoeopathy . This must have been a very attractive proposition for the “articulate” patients, moreover it was hoped that reading would reinforce immunity to hostile rumours i.e, criticism of Homoeopathy. In modern marketing this is called “building customer loyalty”
• Another special feature of Hahnemann’s modus operandi was “extensive written documentation” which would enable the doctor to reconstruct the illness even after a considerable gap of time. This may be regarded as an early form of “quality assurance”, from which the patient immensely benefitted.
• Hahnemann eschewed those heroic therapies
• The excellent documentation of Hahnemann’s practice also makes it possible to analyze practice rate, frequency of consultation and gender specific and social composition of his body of patients.
• Hahnemann spent at least 45 minutes with each patient .
• The social composition of his patients also changed because of the social profiles of the cities of the cities he lived in.; Eilenburg was a small town, Leipzig was a large commercial centre , Koethen was a minor princely seat, he was the fashionable physician of Koethen.
• Over the whole period of hahnemann’s medical career the tendency was for his patient body to comprise increasing numbers of the wealthier middle and upper classes.
• The campaign for the right of Homoeopathic doctors to do their own dispensing i.e; to manufacture and sell homoeopathic remedies themselves. At the same time , organized patients used their market strength to push pharmacists to lower their prices for medicines to a minimum.Patients lobbied repeatedly for chairs of Homoeopathy to be established at universities.

( Dr Martin Dinges has an enviable museum on History of Homoeopathy in Stuttgart, Germany )